Dr. Jeremy Edwards, a professor in the UNM departments of Chemistry & Chemical Biology, Chemical & Nuclear Engineering, Molecular Genetics & Microbiology, and a member of the UNM Comprehensive Cancer Center, is developing next-generation DNA sequencing technologies that promise to have a disruptive impact on the field of genomics and bioinformatics.  Dr. Edwards works at the interface of biology, bioinformatics, and engineering.  He believes that transformative research in the biological sciences will be driven by genomics technology. His laboratory in the Comprehensive Cancer Center at the University of New Mexico is comprised of a very active group of engineers, biologists, and chemists who are working toward the development of new DNA sequencing technology and computational biology.  DNA sequencing technology has the potential to significantly and substantially impact health care, both directly by providing diagnostic and prognostic markers for the clinical setting, and indirectly by accelerating the pace of basic and clinical biomedical research.

Local start-up ElectroSeq is a next-generation DNA sequencing company licensing Dr. Edwards’ technology to develop a DNA sequencer consisting of an instrument and a disposable chip that will carry out sequencing by synthesis. The disposable chip carries an array of ion-sensitive field-effect transistors (ISFETs) to detect polymerase extension by detecting protons (hydrogen ions). The company’s goal is an array of 10 billion sensors per chip. This sensor density will allow the sequencing of ten human genomes in a single one-day run at a cost of $100/genome.  His other DNA sequencing technologies are licensed to Centrillion Biosciences, Inc. and optioned to local start-ups Armonica Technologies LLC and EquiSeq Inc.

The advancement of the study of the human genome is considered by many to be one of the most significant scientific achievements in modern history. Now, a new technique developed at The University of New Mexico will change the way researchers sequence DNA, what they’re able to learn from it and how many lives they’re able to save.

Dr. Jeremy Edwards, a professor of chemistry and chemical biology, specializes in genomics and bioinformatics. He and his research team at UNM’s Cancer Research Center have developed a technology that can give scientists a more complete picture of someone’s genetic makeup.

DNA stretched out over a surface.

“What’s being done already is very good, but I think it’s just the first step in understanding the genome and how the genome impacts biology and human health,” explained Edwards. “The current technologies can’t sequence the entire human genome; we’re definitely missing information. But, our technology will give more information and help us bridge that gap.”

To understand Edwards’ research, you first need to understand how sequencing is done now and why it’s important. Currently, scientists take a person’s DNA – long molecules made up of around 6 billion ‘bases’ – and chop it up in to shorter molecules of around 100 ‘bases’ and this is what they sequence. Then, using computational analysis, researchers compare the 100s of millions of sequenced 100 base DNA pieces to the reference genome from the Human Genome Project (HGP).

Comparing the source DNA to the HGP can give scientists clues about a person’s susceptibility to certain diseases and whether or not specific drug therapies will be successful in a particular patient. Along with the incredible medical benefits, DNA sequencing also gives clues to a variety of other biological traits, but according to Edwards, it still falls short.

“Right now, you get all a lot of information,” Edwards said. “However, the experimental technologies and computational approaches aren’t good enough to line those up correctly across the entire genome. There will be a lot of gaps, you’ll miss a lot of regions due to peculiarities of the human genome, such as repetitive elements.” 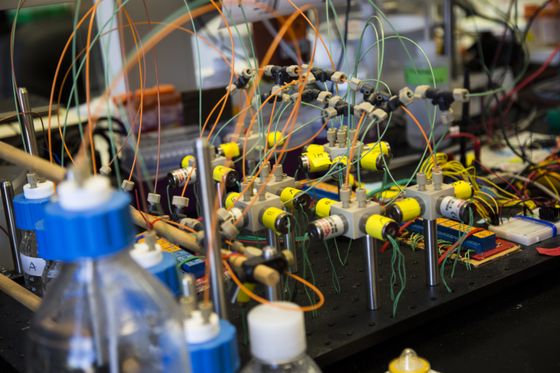 Edwards and his team have built a prototype DNA sequencing machine to be used in their laboratory for experiments.

His method of sequencing provides the same insight but gives a more complete picture of the genome by allowing the researcher the ability to sequence the entire molecule without having to break it up into smaller parts.

Edwards says his technique has the potential to provide even more information about a person’s DNA, including which pieces came from a person’s mother or father, called haplotype information. He says you’ll also be able learn more about how certain parts of the genome interact with each other, something that’s not currently possible. It’s a technique that could transform the industry and have an even greater impact on patients.

While the benefits of this new sequencing technology will be valuable for researchers around the world, Edwards hopes to implement the method here in the Southwest through a genome sequencing project aimed at the local population.

The New Mexico Genome Project would be incredibly beneficial for New Mexicans, according to Edwards. Because of the state’s unique, diverse population, other sequencing efforts across the country don’t always ‘fit’ the people here. So, by sequencing those from different communities and backgrounds in the state, scientists would be able to focus in on diseases and genetic health problems that specifically impact the NM population. 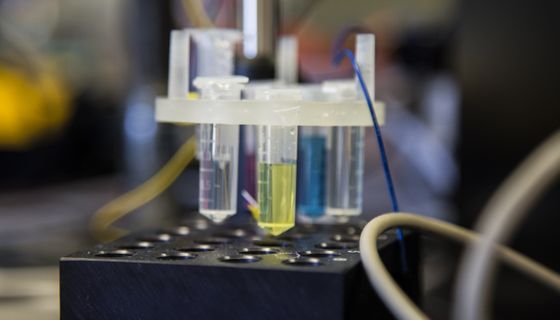 But, since the project would involve Edwards’ innovative sequencing technology, the benefits don’t stop at understanding health and human biology. Researchers would also be able to use genetic testing to trace a person’s lineage, opening a window into the history of New Mexico and its population, and answer more questions that could help save lives in the future.

“It’s not just about getting a better understanding of human health and disease; we also want to understand the population structure in New Mexico,” said Edwards. “And that’s very important in understanding why certain populations respond differently to certain treatments and drugs and why they’re predisposed to different types of diseases.”

Edwards and his research team are part of a group of interdisciplinary scientists that will work in the new Physics, Astronomy & Interdisciplinary Science (PAIS) facility that’s been proposed to be built on UNM’s campus.

PAIS, a new state-of-the-art high-research center, is slated to be constructed at the site of an existing City of Albuquerque water reservoir, just north of Central Ave. between Yale Blvd. and Cornell Dr. The building would house the Department of Physics & Astronomy as well as a variety of other scientists, including Edwards.

The 137,000 sq. foot facility will have research labs, classrooms, office space and modern infrastructure to support a range of projects being done at UNM.

For Edwards, the idea of an Interdisciplinary Science space is something he believes will help propel his, and other research projects forward. He believes bringing together scientists from different disciplines will allow researchers to crack some of the world’s biggest problems.

“I think having an interdisciplinary space is essential. I don’t think there are many problems in the 21st Century science that are going to be solved by single disciplines,” he said. “Cancer for example: You think that’s a biology problem, a health sciences problem? However, it is a disease that cannot be solved without bioinformatics, engineers, physicists, social scientists. There are very few problems, I think, that remain that are going to be solved by a single discipline.”

He also says it’s especially exciting to see the University invest in his area of expertise, something he believes will position UNM to be a leader in the field and help the institution attract more students from across New Mexico and the world.

“The University, in doing this, is really recognizing the importance of genomics and bioinformatics,” he said. “For probably 20 years, people have known that this field is going to change the world, so it’s very exciting that UNM is putting effort and resources behind something that will be very important.”

The facility, which will cost more than $65-million, would be the largest building on main campus. Right now, the majority of that money would come from bonds, with New Mexicans slated to vote on a General Obligation Bond package this November. If Bond C is approved, the facility could be completed by 2019.